On the 10th November 2015 final day of REETS project was organized and coordinated by ASECAP. The event was held in the headquarters of the EESC (European Economic and Social Committee). It was a successful event with over 100 participants. From EESC participated, Mr. C. Back that was the EESC rapporteur on the Transport White paper. From EC participated Mr. E. Liegeois (the Head of Unit in the DGMOVE).

Two key findings of REETS were analyzed: The REETS/EETS Information Platform and the coordination of the different deployment oriented cross-border tolling pilots in the EU regions. The discussion was focused on the key REETS/EETS activities that would start the day after, i.e. as from the 31/12/2015 when formally the REETS project comes to an end. 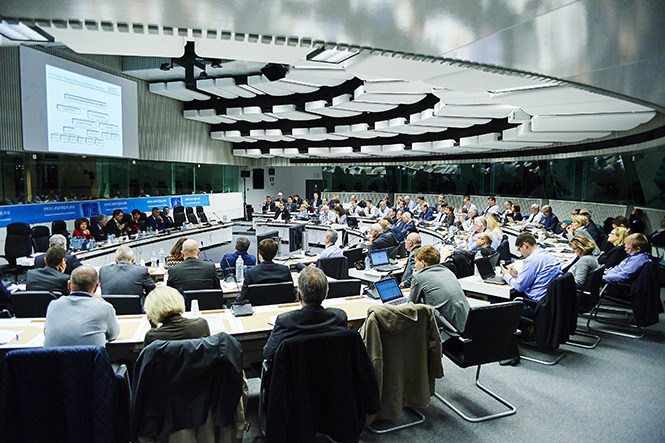 In compliance with the Directive 2004/52/EC and the Decision of EC 2009/750/EC on implementation of EETS, Member States have obligation to establish European electronic toll collection service (EETS). Since implementation of the two above mentioned laws was very long and without real business case behind European Commission tried again and again to push and speed the process of introduction of such pan-European service.

Therefore EC encouraged and supported any projects contributing to achieve the goal that has been set, such as CESARE I-IV, project that lead to more mature project known as REETS project aiming at introduction of more realistic regional and business oriented interoperability projects of regional character (Regional European Electronic Toll Service).

REETS project is a key European project co-financed by the EU through TEN-T Programme on the basis of tender TEN-T 2012/2013. Goal of this project is deployment of EETS on regional level by providing concrete and realistic technical and commercial solutions in order to solve obstacles to implementation of EETS.

Different partners involved in implementation of EETS Directive are participating in REETS project: Toll Chargers, EETS Service Providers and Member States. Is it also envisaged to include other external stakeholders by organizing specific consultation groups that can provide valuable inputs due to various activities they carry out.

President of the project consortium is Jean Mesqui, who was for many years a President of Technical Committee for Toll as well as president of ASECAP in several mandates.

Project Leader of REETS is Hubert Resch from Austrian ASFINAG.

Some key information about Project:

1. Phase of the Project- Analytical Phase

Analysis that were carried out constitute basis for future development and deployment of EETS by creating a platform which enables provides Toll Chargers and EETS Service Providers to exchange ideas, professional evaluations and know-how on possibilities to develop and implement interoperable electronic toll service on the entire motorway network in EU.

2. Phase of the Project – Monitoring Phase

This Phase is focused on application of recommendations set during an Analytical Phase. Results obtained through implementation of real business oriented project on regional level are monitored during this Phase, whereby different regional pilot projects for implementation of EETS in different EU regions have been set up.

Permanent flow of information with external stakeholders is ensured and they all have access to the results of the project and are provided with concrete support through a Help Desk, trying to identify their dilemmas and respond to the most important issues related to REETS.

Project came to an end on December 31st, 2015 but all stakeholders including European Commission agree that the Project should continue beyond that date in a form to be defined by the end of the year 2015.

All relevant information on implementation of REETS/EETS that have been gathered until now is available on the official web of the Project www.reets.eu