43th edition of ASECAP Study and Information days was held in Lisbon from 27th to 29th May 2015 in the capital of Portugal. During two days event, which is the most important gathering of motorways companies in Europe, ASECAP Days examined the role of toll motorways in creating the realistic and multimodal system. 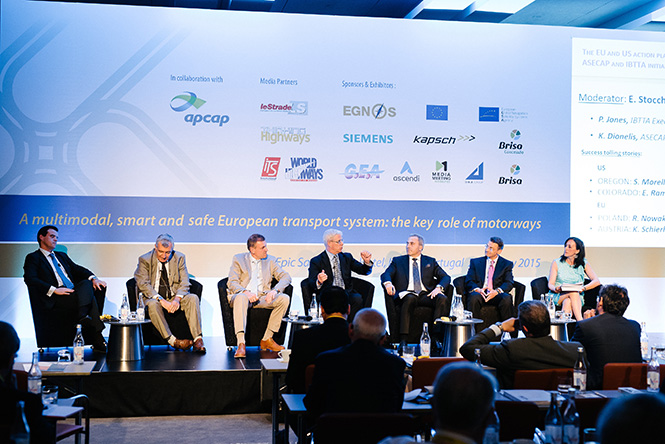 President of ASECAP, Oyvind Halleraker reminded the participants that use of motorway is a service which includes a package of different services that constitute a product that we are selling to our users. User is in the focus of motorway operator’s interest and activities. Our objective is to provide necessary information to users without distracting him or overwhelming him with too many information. To achieve that the coordination, cooperation and dynamic between concessionaires, state administration, drivers but also automotive industry is needed. Javier Rodriguez, President of World toll motorways IBTTA underlined that there is no development of motorways without toll.

Representative of Centre for Expertise for PPP within EIB, institution that helps public entities to implement PPP project in more efficient way presented figures proving that financing of projects is not an issue, but reimbursement of funds and the will of EU citizens to pay is. He also stated that since crisis in EU in 2008 less and less motorway projects have been financed through private funds or PPP model whilst project financed by governments are in increase, but governments are not willing to invest in motorways.

President of Greek motorway association Hellastron, Bill Halkias mentioned that so called Junkers plan would be a sort of Marshall plan for Europe and is meant to be a great road fund. Bill Halkias underlined that EU should consider setting up of Bank for development of infrastructure projects as the one existing in USA.

World known company VINCI gave presentation on several examples in Paris and Madrid where multi modal schemes are in operation. Transport is ensured by express public buses for commuters living 30-50 km from motorway. By their own means, cars or train or buses people are arriving to bus stations specially build for that purpose. To this stations on motorways people can arrive by speed trains, metro or car since there are also parking places on these bus stations aside the motorway. Here commuters can switch to express bus lines that circulate on motorways. In peak hours buses are going every 5 minutes. 80 % of users are commuters, and 20% students. On 7 motorways around Madrid there are 60 lined where 2500 buses circulate on daily basis and transport around 50.000 people.

Success stories from EU and USA

Members of the World toll motorways association shared with participants some experiences from USA. Representative of an consulting company which worked on introduction of toll based on kilometres travelled in Oregon presented how the Oregon State introduced tolling and which argumentation it used as to clarify to users how much money they already pay for use of motorways and that new tolling system will avoid payment of fuel tax, and that there will be no double taxation.

Second success story is the one from Portuguese company BRISA that has been awarded concession for Northwest Parkway in Colorado State in USA. This State decided in 2008 to improve its existing tolling system and BRISA came with brand new and innovative solutions. It introduced exclusively free-flow tolling system including highly efficient vehicle recognition technology, enabled flexibility and tariff modulation as well as new payment options. It also optimised maintenance costs and created brand new product named GO PASS.

Robert Nowak, president of concession company AWSA II, presented a success story of Polish motorway A2, of total length of 106 km, being part of TEN corridors. During 4 years of negotiations (2004-2008) government advisors offered number of reimbursement proposals but none of them was acceptable for banks. After years of unsuccessful negotiations time constraint lead to acceleration of talks. Politicians regain courage to reconsider risk allocation between partners and with strong support from EIB-negotiations took 3 months and in June 2009 financial closing was finally reached. It was the most important project i Poland amounting to total value of 1,5 billion EUR. Strong commitment of the concessionary company and its confidence in the success of the project together with the flexibility of the Polish Government in slight change in risk allocation as well as success oriented team work resulted in successful project that was finalized 6 months ahead of the schedule, within the budget and without bankruptcy of construction companies involved.

During second day of the congress number of technical proceedings were presented to participants, namely in the field of ITS, road safety and toll collection. Innovative means of toll collection were presented, i.e. mobility pricing, which includes payment of fee according to principle pay as you drive, with numerous parameters that define way, time, type of vehicle, driving manner and other elements defining the amount of toll. All proceedings are available at www.asecap.com